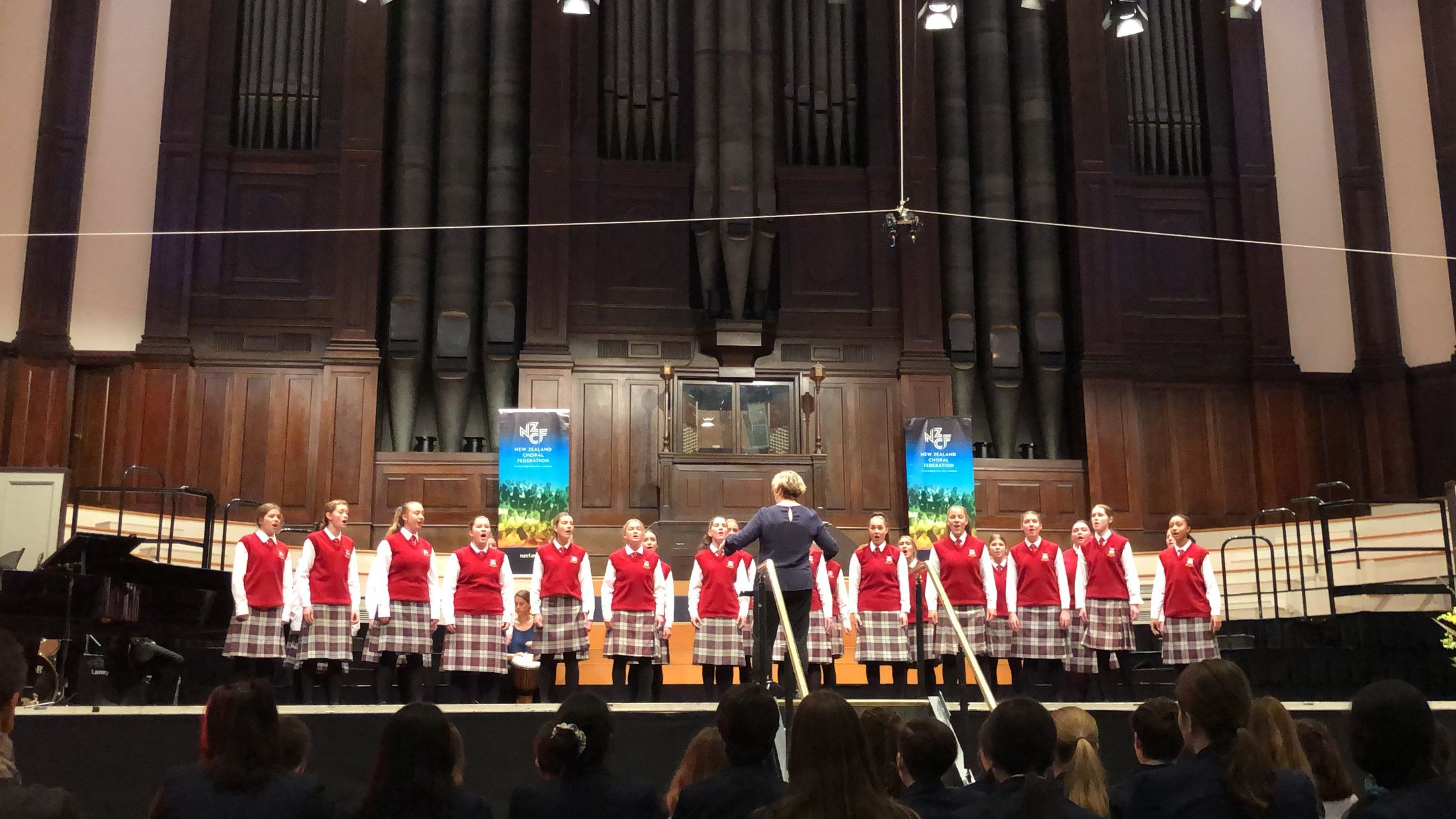 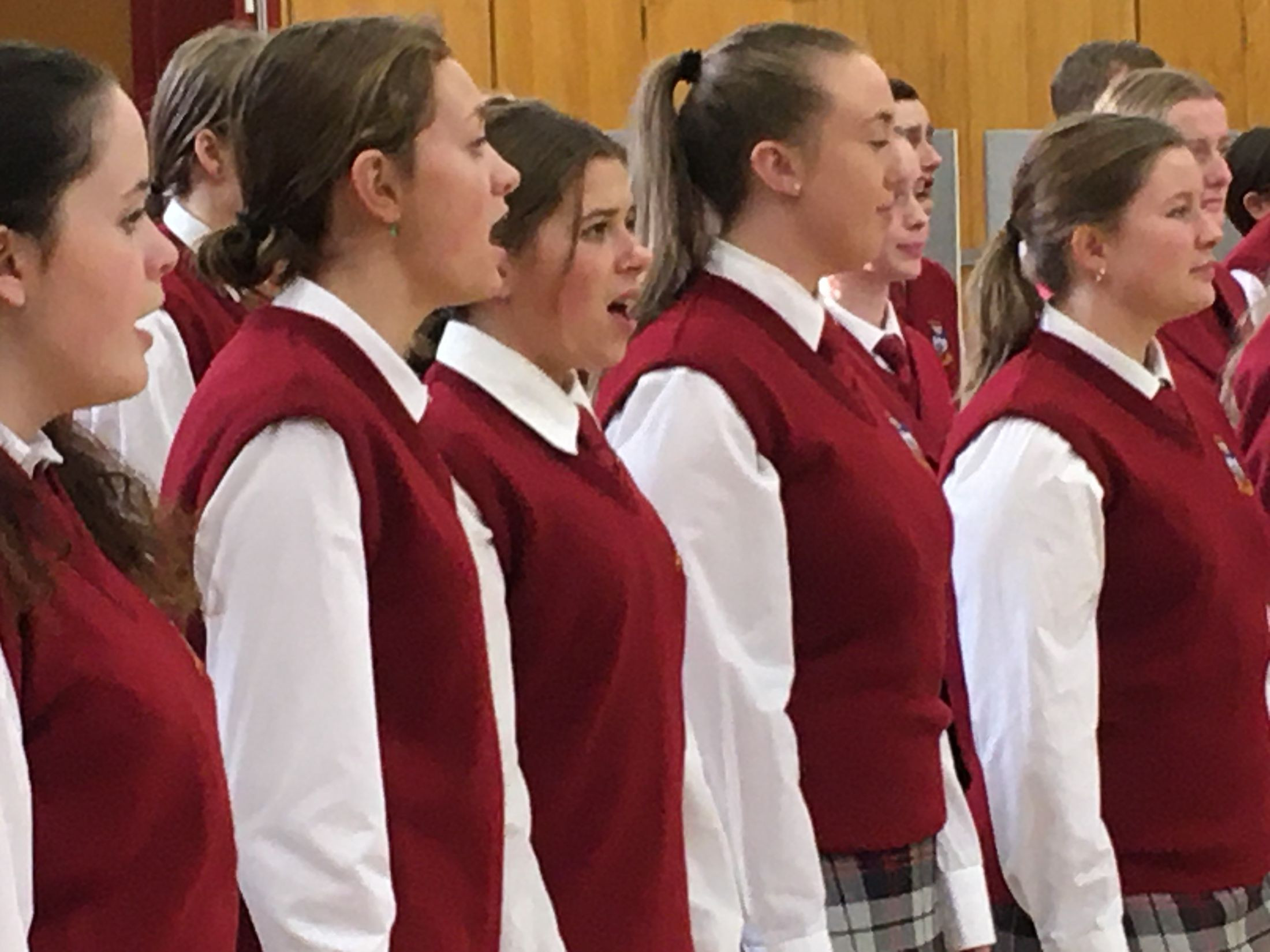 The Big Sing
On Sunday the 13th of June, the Dunstanza Senior Girls and Dunstanza Choirs travelled down to Dunedin to compete at the Big Sing Choral Competition.

The Dunstanza Choir is a choir made up of over 60 students of all ages within the school (with the exclusion of some who travel up from Roxburgh to join us). Dunstanza is a non auditioned choir, meaning if you wish to be a part of the choir there is a place for you. We are conducted by the talented Nick Meissel with the lovely Bronwyn Barnes's assistance to keep him on track.

For female students years 11-13, there is a chance to be part of the Dunstanza Senior Girls' Choir. The Senior Girls' choir is managed by musician and music teacher, Liz Conway conducting alongside Mrs Barnes.

Staying at the Burns Lodge in Mosgiel gave the choirs an opportunity to practise their songs in Burns Lodge Chapel, which has amazing acoustics. Both choirs also performed in St Paul's Cathedral and the Dunedin Railway Station, which gathered an audience off the street to listen.

The Big Sing is an annual competition for choirs where they perform songs from three categories; Classical, New Zealand music and finally a song of their choice. This year it was adjudicated by Peter Watts from Auckland. Both choirs got some awesome feedback. Dunstanza were told "the way they tackled different styles of music was admirable" while our Senior Girls  "energy was contagious".

The main Dunstanza choir performed Sign of the Times by Harry styles, Kyrie by Andrea Klouse (a classical piece) and Nga Iwi E arranged by our very own Mrs Barnes. Dunstanza Senior Girls performed No Roots by Alice Merton, Truth by Andrea Ramsey with amazing featured soloist Maria McKeen and Aotearoa by Josie Burdon with soloist Aja Tate-Bell doing the fierce Karanga which featured on the front page of the ODT on Tuesday last week. (picture shown below)

We had the pleasure of being accompanied by an amazing band made up of Jordan Miller on bass, Scott Horrel on drums, and George Hazlett on guitar. George and Jordan also performed some amazing solos on their guitars at Roxburgh Area School on the way home.

We’d like to acknowledge Dunstan Itinerant Music teacher, Carol Randall who was working hard behind the scenes at the Big Sing and who often helped the choirs with their singing techniques prior to the performance.

Dunstanza and Dunstanza Senior Girls were both awarded a Commended certificate as well as Dunstan receiving a $500 prize from the Ministry of Youth Development for the Spirit of the Festival. The award is for a choir in the region that encourages leadership, community participation, collaboration and innovation. An example of this is when we performed at primary schools to expose them to choral music and are currently making plans to go into schools again next term to make music together.

Many thanks to Liz Conway,  Mr Nick Meissel, and Mrs Browyn Barnes. Without your continued passion and support there would be no choir. We appreciate all your hard work.

Congratulations to Dunstanza who were awarded a Commended on their performance and came away with the Ministry of Youth Development Spirit of Festival Award and $500.